Here’s a crucial misconception by the public. It’s a misunderstanding that leads to calls for government mandates such as a $15 minimum wage — with the cost supposedly paid out of “greedy business” profits.

A poll asked: “Just a rough guess, what percent profit on each dollar of sales do you think the average company makes after taxes?”

The average response: 36%. That’s about FIVE TIMES the actual figure. Other polls give similar results.

To state the obvious:  Given that labor costs constitute 30% or more of the sales dollar for most industries, the cost of a $15 minimum wage will HAVE to be paid by the customers.

BTW, the latest (2018) profit margin for hated Walmart? 2.25%. That’s BEFORE Walmart paid 37.4% of its profits in federal and state corporate income taxes, leaving Walmart with an after-tax profit margin of 1.4%! See details at the bottom of this article.

Share this info with friends AND enemies. Let’s raise the economic awareness of America.

The public thinks the average company makes a 36% profit margin, which is about 5X too high 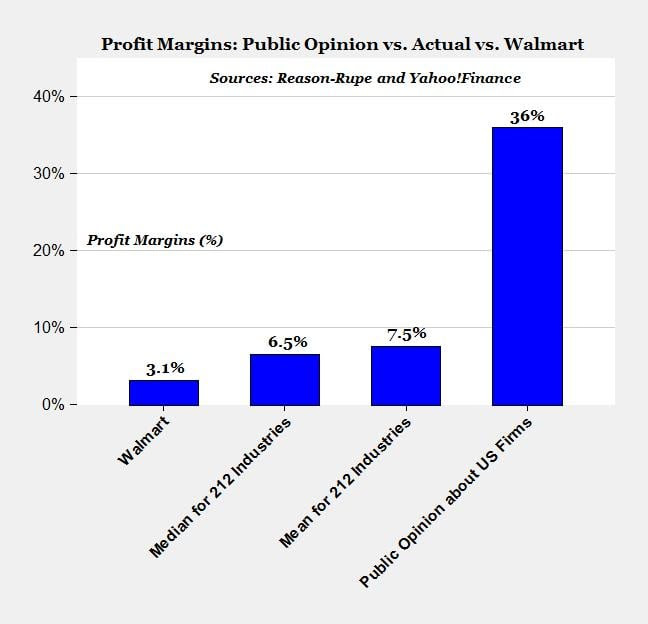 I find this totally fascinating, though not completely unexpected. When a random sample of Americans was asked the question “Just a rough guess, what percent profit on each dollar of sales do you think the average company makes after taxes?” for the Reason-Rupe poll in May 2013, the average response was 36%!

That response was very close to historical results from the polling organization ORC’s polls for a slightly different, but related question: What percent profit on each dollar of sales do you think the average manufacturer makes after taxes? Responses to that question in 9 different polls between 1971 and 1987 ranged from 28% to 37% and averaged 31.6%.

“Big Oil” companies (Major Integrated Oil and Gas) make a lot of profits, right? Well, that industry had a below-average profit margin of 5.1% in the most recent quarter.

And evil Walmart only made a 3.1% profit margin in the most recent quarter (as I reported recently), which is less than half of the almost 7% average government take on retails sales in the form of state and local sales taxes. Think about it – for every $100 in sales for Walmart, the state/local governments get an average of $6.88 in sales taxes (and as much $9.44 in Tennessee and $9.16 in Arizona, see data here), while Walmart gets only $3.10 in profits!

Bottom Line: The public’s complete overestimation of how much companies earn in profits as a share of sales explains a lot. If $36 of every $100 in sales at a company like Walmart, McDonald’s, Home Depot, Ford Motor Company or a local dry cleaner or restaurant really did turn into profits, then of course those companies could afford to pay unrealistic living wages of $15 per hour, accept unreasonable demands from labor unions, provide all sorts of generous fringe benefits including weeks of paid holidays, long paid maternity leaves, and gold-plated pension programs, etc.

The public that believes in the fantasy-world of sky-high 36% profit margins would naturally think companies are just being greedy and stingy when they don’t pay higher “living wages” and have to be forced to do so through minimum wage, or living wage, legislation.

If the average person could realize that a 36% profit margin isn’t even close to reality and that the typical median firm has a profit margin of only 6.5%, or almost 30 percentage points below what the public thinks is a normal profit margin, then hopefully the average person would become a little more realistic about how the business world operates. Companies aren’t being stingy when they pay competitive wages, they’re just trying to survive on what are sometimes razor-thin profit margins, in a competitive environment where there’s not a large margin of error.

If they’re not operating efficiently and watching costs very carefully, it’s pretty easy for a business to go from a 6.5% profit margin to a 0% break-even situation, and then to losses and bankruptcy — just look at the more than half a million businesses that fail every year.

The Left loves to claim that many if not most corporations pay zero income tax. A few do (using government tax credits or simply not making a profit), but most pay a pretty substantial amount.

But then on this $11.45 billion profit, Walmart paid $4.281 billion in corporate income taxes. That’s 37.4% of Walmart’s profits paid to the federal and state governments. That leaves Walmart with an after-tax profit margin of 1.4%!

And, of course, that tax doesn’t count all the OTHER taxes paid (and deducted before “profit” is calculated) — property taxes, inventory taxes, payroll taxes, insurance taxes, etc.