“We’ve guaranteed a 2% rate savings and I can’t look anyone in the eye and say we’ll meet that,” he added. “I can only look at Solana Beach’s example and what they’ve been through the last two years and continue to struggle.” – Carlsbad Mayor Matt Hall

On July 23, there was a meeting of the Clean Energy Alliance. The board members involved were the Chair, Mayor Havilland of Del Mar, the Vice-Chair, Councilwoman Kristi Becker of Solana Beach, and Councilwoman Cori Schumacher of Carlsbad. It may have been the beginning of the end for Community Choice Energy, touted by the surfer savant as her legacy achievement. If trends continue.

During the meeting, Vice Chairwoman Kristi Becker of Solana Beach pushed back on a proposal submitted by a labor union presented by Chairwoman Cori Schumacher to secure a Project Labor Agreement for the Clean Energy Alliance projects. It was a contentious spectacle. Carlsbad’s surfer savant may have killed what she once claimed to love the most. It is a tale on one hand of hubris. On the other, it’s a saga of a politician swimming in the dark and murky current of “the swamp” without a surfboard.

As I noted in an earlier piece, it is obvious that both of Cori’s colleagues on the CEA board were not inclined to rewrite policies on the fly, no matter how much Schumacher badgered them.

Ms. Schumacher was trying to write an administrative policy on the fly to benefit the International Brotherhood of Electrical Workers Local 569. The Union Local is one of many labor unions that contributed generously to the Councilwoman’s 2020 campaign in a special election she forced, by the importation of Union Labor to gather petitions and then win a snap election for the District One Council seat. IBEW contributed $10,500 to the Councilwoman’s campaign, bundled with another $5,000 from a closely associated union in February 2020.

The donation in February was preceded by another $5,000 gift from the Brotherhood in December 2019. That equates to $15,500 from a single entity, whose interests the Councilwoman was willing to advance at the expense of risking the viability of her “Clean Energy Alliance.”

As they say on infomercials, “Wait there’s more…” The Councilwoman also received another $5,200 from the IBEW in 2018 for her Mayoral campaign.

In short, donations from the International Brotherhood of Electrical Workers to Cori Schumacher in the last two campaign cycles totaled over $20,000.

This question was raised by Citizen Activist (and talented video blogger) Anthony Bona at the Carlsbad City Council Meeting that followed. “Councilmember Schumacher, why did you not disclose to the residents of Carlsbad that you received over $10,000 in a campaign contribution from IBEW 569? Is this your version of transparency? Omitting information? Why did you not disclose this large campaign contribution to the CEA board in which you occupy a seat? This seems like an outright omission of a material fact.” Mr. Bona details his position in the following video, including a call for the Councilwoman to resign.

As noted by Steve Puterski in The Coast News, there was a compelling reason for Schumacher to raise the question of the Project Labor Agreement and demand an immediate passage at the Alliances meeting, despite the work of its staff and her colleague’s obvious reservations. He states the following, “Altshuler Berzpn, a law firm in San Francisco, submitted a letter submitted a letter on behalf of the International Brotherhood of Electrical Workers Local 569 on July 21 to the Clean Energy Alliance board.” 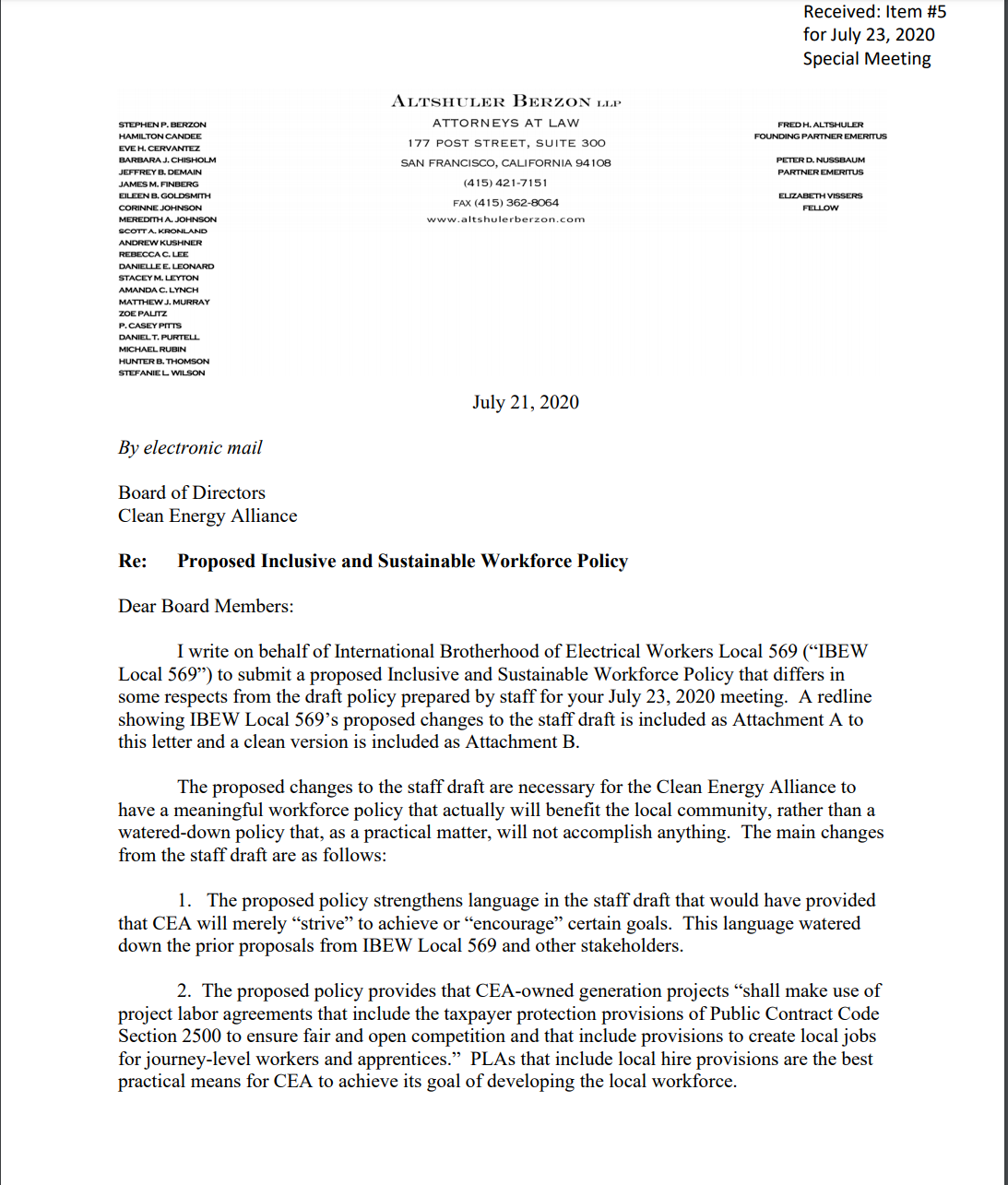 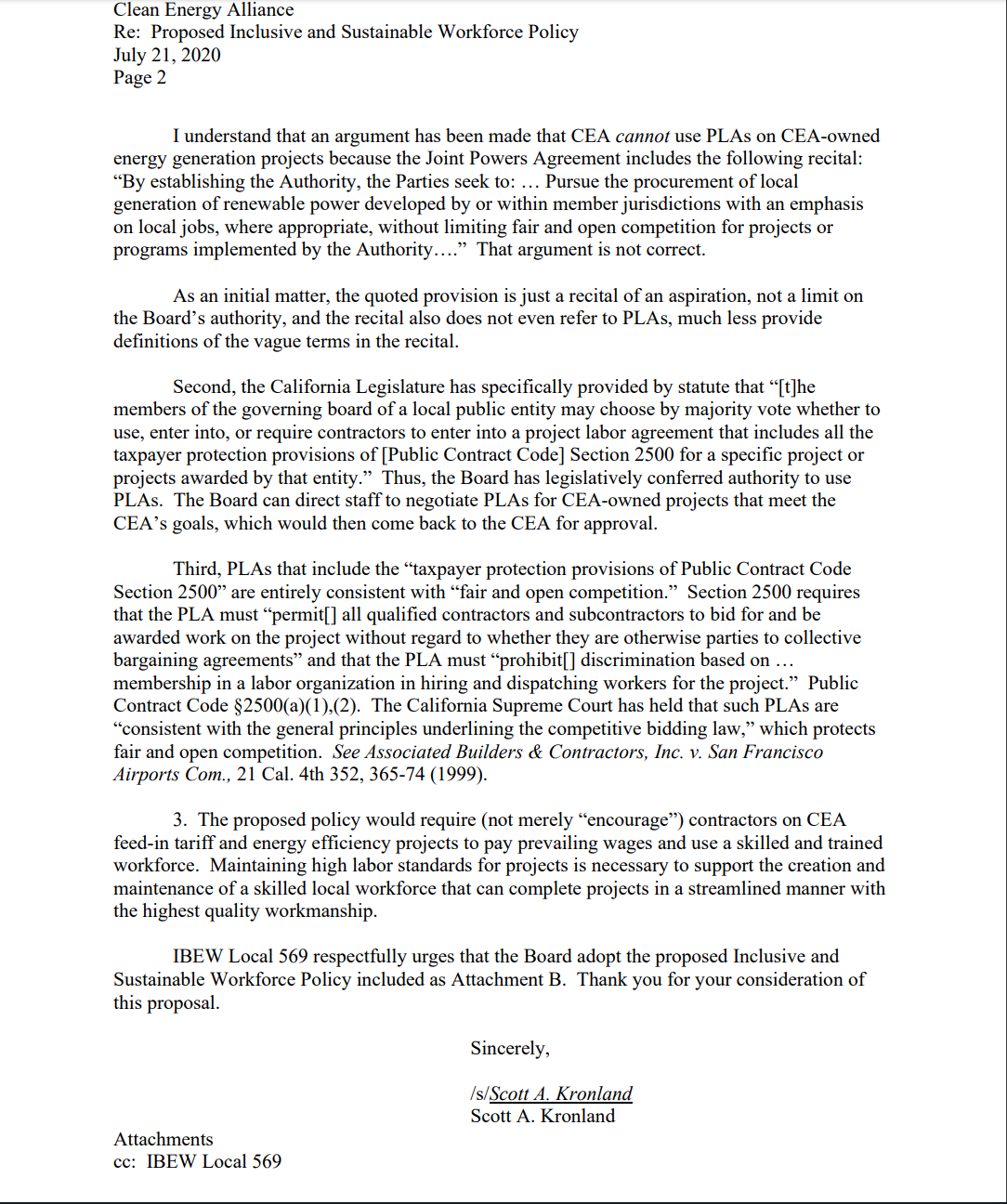 “The letter from the IDEW labor union was in regard to the CEA’s Inclusive and Sustainable Workforce Policy and includes language for a PLA and other edits from the original draft policy. It took the CEA board by surprise as the CEA has been in discussions with numerous municipalities about joining the CEA, according to Becker, CEA’s vice-chair. In fact, San Diego County and the city of Santee helped draft the joint powers agreement last year with an eye on joining CEA in the next several months or next year.”

As noted in previous pieces I’ve written on Community Choice Aggregation, the key to its survival is size. As of writing the Clean Energy alliance consists of a pool of three communities. Del Mar is a Village of 4300 souls, Solana Beach has 13,500, and Carlsbad has 116,000 according to recent estimates. Currently, Solana Beach is operating with its own troubled solo excursion into Community Choice, as well as the venture with Del Mar and Carlsbad. There are not enough ratepayers to drive economies of scale, especially when compared to the one led by the City of San Diego. That is why expected partners such as Encinitas opted to join the larger CCA, along with some serious reservations with having Cori Schumacher as a business partner. In addition, there are the fixed costs incumbent with the creation of a new bureaucracy within the joint powers agreement, whose costs when spread across such a small pool of ratepayers assures that the cost to consumers will be higher under Cori Choice Energy.

In order to survive and grow, the Clean Energy Alliance needs more partners and has been desperately trying to get other municipalities to join. Done right, there is a potential for a million more people to join the CEA if Orange County cities are considered as potential members. Councilwoman Becker pointed out on July 23rd that Cori’s demands on behalf of her major donors would kill the aggregate before it even starts. Becker noted:

“If we want to grow and make sure we’re viable, there’s no reason to adopt this inflexible policy, It was negotiated by the County and Santee; they wanted certain language. We know for a fact they are not going to be interested. The 78 corridor — the same thing. I would like to have any one of those cities. The more cities come on board, the more clean energy jobs. If we’re limiting ourselves today, so I don’t know why you’d do that.”

Incredibly our surfer savant persisted, echoing the union line that the IBEW demands would ensure “high standards and pay” were assured, Then in a signature turn she blamed others, blasting San Diego County and Santee for “leaving us high and dry.” Ultimately she wore down Mayor Havilland, who agreed reluctantly to review the policy at the next meeting.

Those who rail at the President for ignoring experts in their field will appreciate what happened next. As Mr. Puterski noted, Schumacher “also took issue with the CEA staff and their recommendations for the board. Schumacher said staff is being biased with its recommendations and board members should be the ones to bring recommendations.” Her rantings continued:

“Legal analysis should end at legal analysis and not come with additional recommendations. It’s something I don’t find to be helpful. This is a pure policy decision. Unsolicited advice is not welcome in a forum where the public cannot weigh in.”

Interestingly, the Councilwoman did not value the public weighing in at the Carlsbad City council meeting that follows  After Mr. Bona called for her resignation due to the obvious interest conflicts and non-disclosures of Cori’s close relationship with her major donors, she called for censorship, as Mr. Bona explains in this video masterpiece…

During the July 28 Council meeting, on a 2-2 vote, Schumacher’s demand failed for a $4.45 million guaranty in order to get financing for the entity she may have mortally wounded by her behavior on July 23rd.

In voting no, Mayor Hall and Councilman Blackburn cited the ongoing dysfunction of the Alliance, and also questioned under the current paradigm how the CEA could ever achieve even the modest 2% consumer savings Cori Schumacher has claimed for years.

The answer is, there is no way in hell, especially if the strings she has attached to it from her IBEW donors are tied around the neck of her “dream,” which has turned into a nightmare for Carlsbad’s consumers and taxpayers.

You can read this article as originally published here.